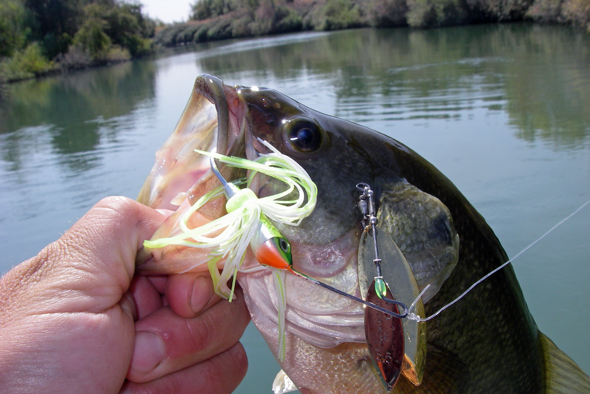 Springtime in Jersey Is Spinnerbait Time!

Over the past month or so I’ve heard many of my angler friends bemoaning the cold weather and cold water temperatures we’ve been enduring this spring. Although the temperatures have been cooler than normal, rainfall has been down for the past few weeks. Normally you would think that the sunny days would warm the water, but it is actually warm spring rains that will warm the water faster than the sun will. By now, I probably would have been pretty much done with my spinnerbait fishing, since the warmer water temperatures would end the spawn and the post spawn gorging by old bucketmouth would more than likely be over too. However, I haven’t closed up and shelved my spinnerbait box just yet. At my fishing spot, the water temperatures have kept the bass spawning a bit longer than usual and I have been anxiously waiting for the big bass fishing to break wide open.

Before I began using spinnerbaits, I would mostly concentrate on worms and jigs through March and April, and to be honest, I wasn’t having much success. I had always looked at the crazy looking spinnerbait with its huge blades and fuzzy looking skirts and just shake my head. How could such a crazy, stupid looking bait work for these tricky fish? I wasn’t sold on it at all. Then I would watch the television and there was Jimmy Houston and Bill Dance banging bass after bass with the darned contraptions! So I headed over to Kapt. Krunch’s in Waretown and bought me the biggest, craziest baits with holographic tape on the hammered nickel and brass blades. They were made by Derstine’s Lures (now called “vintage” on eBay). I figured I’d either join Jimmy and Bill as an angler extraordinaire or get laughed out of the boat by my angling buddies. 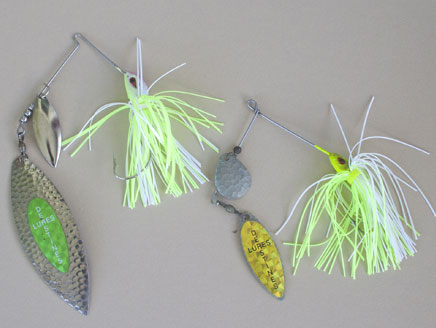 A strange thing happened…I started catching bass. Not a few, but a LOT of bass. I wasn’t getting laughed at. I turned into a regular “pro”! There weren’t many days that I would return from a fishing trip without a few bass. Friends started to consider me a real bass fisherman! They started asking me what I was doing and how I was catching so many fish. Over the years, I’ve  figured out a thing or two about bass and spinnerbaits that I swear by (and I have a beautiful bass on the wall to prove it). And if you’re interested, I’d like to share a few of those “gems of wisdom” with you. 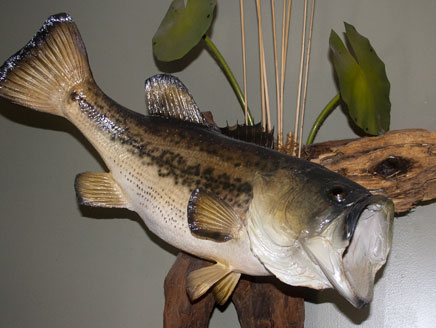 This five pound bass was caught in the Manahawkin impoundments way back before the state took it over and it fell into disarray. It weighed close to five pounds and my fist nearly fits in its mouth. One week later I landed what appeared to be the twin sister of this bass! Both fish fell victim to a Derstine’s spinnerbait.

• How do you know it is the right time to start catching bass on spinnerbaits? Look at the trees on your block. If you or a neighbor has a magnolia tree and/or a dogwood, the trees will communicate to you the right time to get to a lake and start tossing a spinnerbait. After the magnolia tree blossoms, you will normally begin to catch bass on spinnerbaits. Fish them at a slower pace, but I am not a big believer in “slow rolling” them on the bottom. The areas I fish simply have ,too much “gunk” on the bottom for that technique. However, when the dogwood begins to bloom, you will need to speed up your retrieve. I crank my reel so fast that my bait breaks the surface of the water! I would also try to keep it just below the surface so it would make a wake and send out stronger vibrations. Just remember, when the dogwood loses all its blossoms, chances are the spawn will be coming very soon.

• Fish in the rain. That’s right…not a deluge or downpour, but as I mentioned earlier, rain warms the water in the spring. I have always found a light rain or drizzle with a little wind ripple on the surface to be the best conditions to fish with a spinnerbait for largemouths. Sometimes, I would call out sick from work because no one would suspect you’d take off a day when the weather was bad. Fishing in the middle of the week would usually ensure I was on the lake alone as well!

• Big baits catch big fish. Yeah…yeah…I know we’ve all heard some guy swearing he caught the biggest fish of his life on a tiny minnow. However, when fishing a spinnerbait in wind and rain, you need the larger blade (or blades) to overcome the surface disturbance of the weather and create stronger vibrations that a predator like a bass will feel and attack. I prefer a twin willow blade under these conditions. I also like to retrieve…pause…retrieve…pause. Do not stop. Just vary the speed of the retrieve. Many bass will strike the lure slows down and falls slightly.

• Spinnerbaits come in a lot of colors, but I mainly stick to three. I prefer chartreuse and white skirts or a combination of those two colors in cloudy, rainy conditions. I have no scientific research to back this up, but I feel that the combination of wind and rain make the visual aspect a secondary point. I believe the bass are more drawn to the wake and vibration more than anything else. This has proven to be true when I am fishing at dusk and it is nearly dark. I like to use a black skirt with a colorado blade on a lighter wire to increase vibration. The black becomes nearly invisible at night and I feel that the fish is drawn once again to the vibration, not the color.

• Forget trailer hooks. The spinnerbait has proven to be quite weedless for me. The blades and skirt prevent the hook from catching on branches, grass and weeds. A trailer hook will cause more snags and headaches than they are worth. I also have stopped using the newer skirts with longer tails. They frequently tangle in the blades and disturb the action of the spinners. I ended up trimming all my “tournament” skirts. I can’t understand anglers talking about short strikes…I hardly ever have a bass miss a spinnerbait.

• Last but not least, I use “fish juice” on my spinnerbaits. I actually prefer “BaitMate” in their convenient and economical spray bottle. I have definitely found that the scent added to the vibration and action of the spinnerbait has dramatically improved my success. To be honest, I had such good success with the BaitMate Original scent that I have never switched to another.

There you have it…the “FishinJersey Spring Spinnerbait Primer”. If you haven’t fished with spinnerbaits, you owe it to yourself to give them a try. I guarantee if you follow these tips, you’ll see a definite improvement in your Jersey spring bass success. Now get out there and fish!